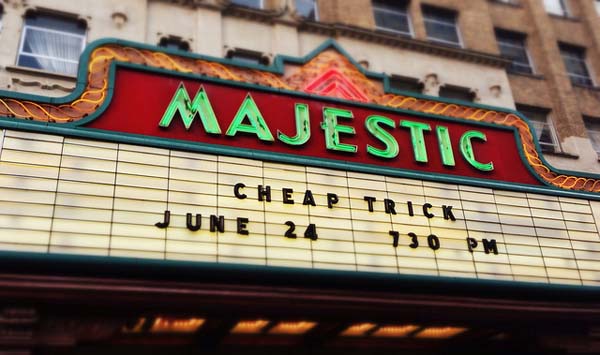 The Majestic Theatre is a great choice for entertainment in San Antonio. It’s part of the Joci Straus Performing Arts Center located in the heart of downtown San Antonio. It was built in 1929 and designed as a Spanish Mediterranean style theatre. It was a partnership of the City of San Antonio along with the Arts Center Enterprises and the non-profit organization Las Casas Foundation.

The three sectors wanted to turn the historic movie theatre into a landmark that could be used as a performing arts facility. After renovations in the 80s and 90s, the $9 million update allowed for this to happen. If you want to check out this National Historic Landmark and enjoy the arts, check it out in San Antonio.

The theatre holds 2,264 seats and is home to the Broadway in San Antonio and San Antonio Symphony. You can see a variety of concerts and performing arts attractions. Today it’s owned by the City of San Antonio even thought it was designed by John Eberson back in 1929. You will notice the Mediterranean style décor, the machine projecting moving clouds across the ceiling and the three different balconies.

The theatre is located at 224 East Houston Street in San Antonio with parking located all around the theatre. Tickets can be purchased online, by phone or at the box office. The theatre can also be rented for the perfect venue for weddings, anniversaries and more.

If you want to catch an upcoming performance, this summer is the perfect time to go. This July will feature Steven Martin & Martin Short, REO Speedwagon, and Martin Lawrence taking the stage. August will bring American Idol Live, Colbie Caillat with Christina Perri, Weird AL Yankovic and Kevin Smith with Ralph Garman. The kids will love Disney’s Little Mermaid this September or Cinderella next April.

If you want to see a beautiful historical landmark featuring some of today’s top performing arts acts, check it out in downtown San Antonio.